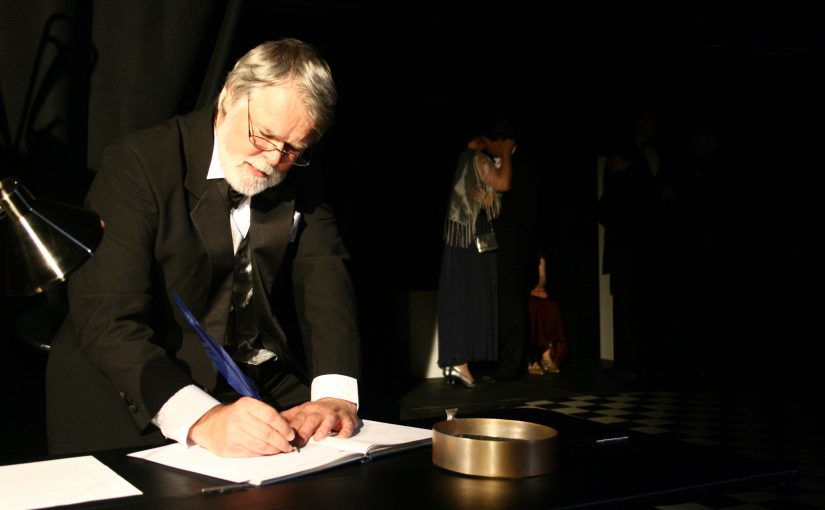 As a poet and playwright working in the renaissance form, I’ve found that if you simply begin a play with the premise that a great deal of your dialogue will be in blank verse, then many of the conventions of the form grow naturally from that decision. A play dealing in the theatricality of language is almost predestined to contain a play-within-a-play, for example.

However, I’ve been happy to discover that these echoes, natural to the form, are timeless. There is no need to use self-consciously ‘ancient’ words, or to engage in flowery language for the sake of it. Iambic pentameter is, in fact, bold and sparse. It is very suited to the patterns of modern speech.

In the theatre, when we watch a Shakespeare play, we don’t feel that we are experiencing a period drama or a revival. The language is resonant, despite certain archaic words and references that are no longer relevant to us. The form is flexible, allowing productions with casts of hundreds or adaptations with small casts doubling, outdoor productions, promenade performances: the list goes on, throughout history.

Of course, Shakespeare casts a long shadow, but many of his contemporaries wrote in the same style, and their works also survive. The playwriting form of the renaissance period – itself a re-birth of classic techniques – is a testimony to the robustness of this type of theatre. There are certain things it is possible to say in this form that aren’t possible in any other.

When working with an iambic pentameter beat, that rhythm of ten stresses per line and its many variations, something happens to the language. Out of the constraint, comes the ability to communicate on a different and deeper level.

Poets are usually restricted to telling the authentic truth from their point of view. But in this form, they are permitted to ‘lie’: or to tell the truth as seen from the point of view of other characters. They can reveal what happens with these ‘truths’ unite or battle against each other. Additionally, dramatic poetry is not just a communion between author and reader on a page. Something will happen on the stage, in front of the audience, as a direct result of this reasoning and expression. The writer is free to explore the moment when a character is caught between thought and action.

In the same way that the tools of the dramatist liberate the poet, the playwright is liberated from prose, delving into the minds and hearts of his characters. The characters become poets. The subtext is driven deeper and deeper until it becomes a mystery, a reflection of the reality of human experience as well as a comment on it.

Often a writer will tackle complex ideas, examining particular questions in order to explain or examine some conflict within themselves or that they see occurring in the world around them. No other form is so suited to fully exploring such conflicts with both ambiguity and precision – for example examining the nature of politics, without becoming in itself political.

In an age of specialisation, it may be rare for writers to engage in this style, as it is necessary to be almost equally engaged in the activities of both poetry and playwriting. Despite this, it is a marriage of techniques well worth pursuing. The qualities that keep audiences enthralled by these plays should also attract the writer. I have been delighted to find that the same skills that directors and actors use to bring the originals to life can just as readily be applied to a new work on this form.